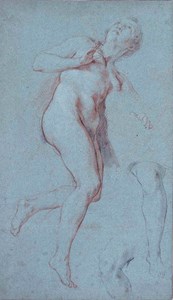 A pupil of Louis Galloche, François Lemoyne (or Le Moyne) won the Prix de Rome in 1711 but was unable to make the trip to Italy due to lack of funds on the part of the Académie. Agrée at the Académie Royale in 1716 and reçu in 1718, Lemoyne met François Berger, comptrolleur général of the Dauphiné and a noted connoisseur and collector, in 1721. Berger became one of Le Moyne’s greatest patrons, commissioning in 1722 the Tancred and Clorinda, now in the Musée des Beaux-Arts in Besançon, and the following year the Perseus and Andromeda today in the Wallace Collection, London. Berger also sponsored Lemoyne’s long-delayed trip to Italy in 1723. In 1725 Lemoyne shared first prize in a competition for history painting with Jean-François de Troy, and as a result won a royal commission for the decoration of the ceiling of the Salon d’Hercule at Versailles. The great Apotheosis of Hercules, painted between 1732 and 1736 and widely praised, was the crowning achievement of Lemoyne’s career, and established him as one of the most renowned history painters of the day. Appointed premier peintre du roi by Louis XV in 1736, his death by suicide a year later marked the end of a short and promising career. Among his pupils were Charles-Joseph Natoire and François Boucher; the early work of both artists reflects Lemoyne’s influence.Some two hundred drawings by François Lemoyne survive today, with about one-third of these in the collection of the Louvre. Many of his drawings can be related to extant paintings, or works known through engravings. One 18th century connoisseur compared the artist favourably with Rubens; noting that ‘Le Moyne’s drawing is superior to that of Rubens because the French artist always managed to keep a certain rigor and decency, while Rubens didn’t.’ That Lemoyne’s drawings continued to be sought after by 18th and 19th century connoisseurs is seen in the fact that large numbers of drawings by the artist were in the Lempereur, Silvestre and Paignon-Dijonval collections.