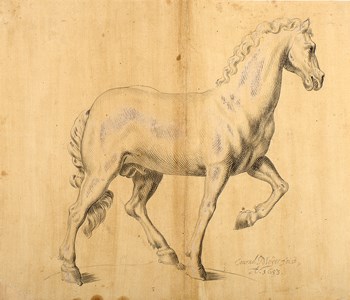 The son and pupil of Dietrich Meyer, Conrad Meyer completed his artistic training in the Frankfurt studio of the printmaker Matthäus Merian the Younger. He continued to work in Germany, mainly in Frankfurt and Augsburg, in the early years of his career before returning to settle in his native Zurich in 1643. There he was soon established as a prolific and successful portrait painter and engraver. As a painter Meyer produced mainly portraits – including many of the leading citizens of Zurich – as well as landscapes, but he later came to specialize in engravings on copper. Meyer’s oeuvre as an engraver numbers over a thousand prints, notably portraits and allegorical subjects. He also engraved a handful of important maps and charts, notably an important 1657 map of Switzerland and the Planisphaerium Coeleste, a celestial map published in 1681. In 1655 Meyer is known to have travelled for several weeks in the Alps making landscape drawings in the company of the Dutch artist Jan Hackaert.