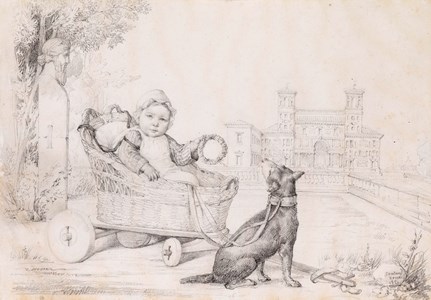 Little is known about Amable-Paul Coutan today, and his brief career and early death has meant that only a handful of works by him survive. A pupil of Antoine-Jean, Baron Gros, he enrolled in the Ecole des Beaux-Arts in 1813. Two early paintings of classical subjects – a 'Philemon and Baucis' of 1818 and a 'Themistocles' of 1819 - are today in the museum in Bourges. Coutan won the Prix de Rome in 1820 with a painting of 'Achilles Awarding Nestor the Prize for Wisdom', now in the collection of the Ecole des Beaux-Arts in Paris. Probably dating from his stay in Rome is a view of Pompeii, today in the Musée Magnin in Dijon. Coutan exhibited at the Salons of 1824, 1827, 1834 and 1836. In 1826 he painted a Christ Carrying the Cross for the church of Saint-Nicolas-des-Champs in Paris, still in situ. He also participated in the decoration of the Parisian church of Notre-Dame de Lorette in 1833, painting two works including a 'Visitation', and completed an allegorical painting for a room in the Palais de Luxembourg. He also produced a number of elegant portraits. Coutan’s final painting, 'The Oath of Louis-Philippe', intended for the Chambre des Députés, was left incomplete at his death in 1837, and was eventually finished by Joseph-Désiré Court.