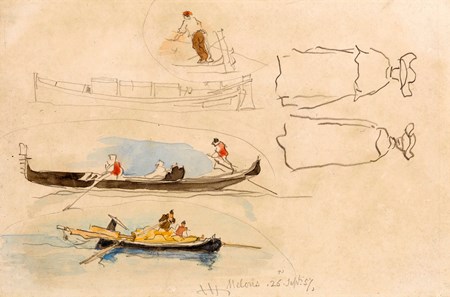 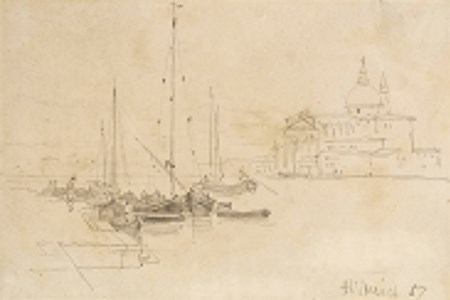 Born in Staffordshire, James Holland was apprenticed as a painter in a pottery at Stoke-on-Trent at the age of twelve, painting flowers on pottery. In 1819 he settled in London, where he continued to work as a pottery painter and also produced watercolours of natural history subjects, but at the same time began to focus on landscapes. By 1824 he had a floral still life painting exhibited at the Royal Academy. At the beginning of the 1830’s he began to travel extensively around Europe, and soon established a reputation for paintings and watercolours of continental views, and in particular depictions of Venice. Holland also travelled to Portugal, Switzerland, Austria and the Netherlands. He joined the Old Water-Colour Society in 1835, and his watercolours of the 1830’s show the particular influence of Richard Parkes Bonington. By the following decade, however, his style had become looser and he began to produce works extensively heightened with bodycolour. Holland continued to exhibit regularly at the Royal Academy, showing both paintings and watercolours, as well as the Society of Painters in Water-Colours, the British Institution and the Society of British Artists. The contents of his studio were dispersed at auction a few months after his death in 1870.