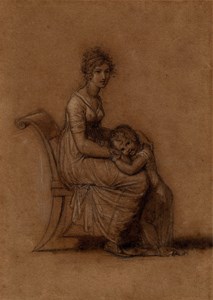 One of the leading Neoclassical artists of his generation, Pierre-Narcisse Guérin was as a youth encouraged to consider a career as an artist by his parents. He was a pupil of Hugues Taraval and Nicolas-Guy Brenet and later studied with Jean-Baptiste Regnault. He first entered the competition for the Prix de Rome in 1793, and won the prize in 1797 with a painting of 'The Death of Cato of Utica'. Unable to leave for Rome immediately because of Napoleon’s campaign in Italy, Guérin eventually arrived at the French Academy in 1804, remaining there for two years. He sent history paintings, genre scenes and mythological subjects to the Salons from 1795 onwards, and his reputation was established early in his career with a painting of The Return of Marcus Sextus, exhibited in 1799 to much acclaim and eventually acquired by Lucien Bonaparte. Guérin was particularly influenced by the plays of Jean Racine, and his painted compositions often display a theatrical approach. Appointed a professor at the École des Beaux-Arts in 1813, he became a highly regarded and successful teacher; his pupils included Théodore Géricault, Eugène Delacroix, Ary Scheffer, Victor Orsel and Paul Delaroche. Offered the post of Director of the French Academy in Rome in 1816, Guérin declined on the grounds that his Royal portrait commissions required him to remain in Paris. When the offer was repeated in 1822, however, he accepted, and during his six years in Rome he painted relatively few works. On his return to France in 1829 he was created a Baron by Charles X, but his declining health prompted a return to Rome, where he died soon after his arrival in 1833. His legacy continued, however, in the work of some of the succeeding generation of painters. As one recent scholar has noted, ‘A second-generation Neoclassicist, Guérin presented a warmer, softer version of the Antique and made it a springboard for the fresh inventions of his pupils, like Gericault and Delacroix, who became Romantics.’