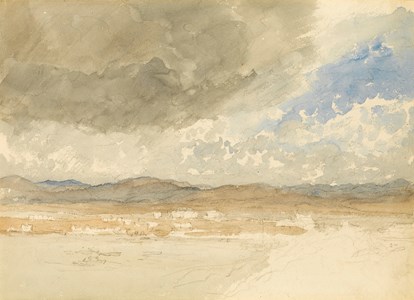 Among the finest watercolourists in England in the first half of the 19th century, David Cox, Senior, was trained as a theatrical scene painter in Birmingham before settling in London in 1804 and establishing himself as a watercolourist. He trained with John Varley, and exhibited for the first time at the Royal Academy in 1805. In 1813 he was admitted to the Society of Painters in Water Colours, where he exhibited every year but two for the remainder of his long and productive career. In 1826 Cox made the first of several trips to the Continent, visiting sites in Belgium and Holland, but most of his sketching trips were closer to home. Cox was a celebrated teacher and drawing master, and published several technical manuals for amateur watercolourists, including Progressive Lessons on Landscape and Young Artists Companion. A stroke suffered in 1853 left him temporarily paralyzed; although he recovered, his eyesight began to suffer and by 1857 had begun to fail completely. Two large posthumous retrospective exhibitions of Cox’s work, each numbering several hundred works, were held in Liverpool in 1875 and Birmingham in 1890.