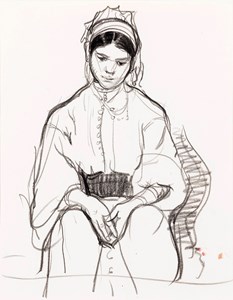 The daughter and pupil of the painter Norman Garstin, Mary Dochie Alethea Garstin began painting seriously at the age of sixteen, and two years later she had a work accepted by the Royal Academy Summer exhibition; at the time the youngest artist ever to be so honoured. She often accompanied her father when he undertook the summer schools of painting which he held almost every year in Brittany and Northern France between 1899 and 1927, and in which she also participated. She continued to exhibit widely; at group shows in galleries and at open exhibitions in England and elsewhere until just before her death. Her first gallery exhibitions were joint shows with her father, held in London in 1921 and 1924, and she had her first solo gallery exhibition in 1940. Garstin lived for most of her life in Penzance, but travelled widely throughout England, Ireland, and Scotland, often using her small red Morris Eight car as a mobile studio and producing small paintings of the sites she visited. She also made trips to France, Belgium, Italy, Morocco, Kenya and elsewhere. Among her close friends were the artists Dod Proctor, with whom she sometimes travelled, Alfred Wallis and Morland Lewis. She remained very active well into old age, with her final painting trip abroad – a journey around Brittany - undertaken at the age of eighty-two.Alethea Garstin’s paintings, almost always on a small, intimate scale, are characterized by a lightness of touch and a freedom of execution. Her paintings have been aptly likened to the intimiste paintings of Edouard Vuillard by the artist Patrick Heron, who championed her work. Writing just before her death, Heron noted, ‘I say Vuillard in view of the basic means employed by Alethea throughout sixty years of painting small, delectable, ever-different pictures…and that basic means is the small, blunt-ended hoghair brush which stippled, stroked, dragged and drew good old-fashioned oil paint, depositing it with an infinite variety of tonal colours upon tiny panels of wood…I have taken Vuillard as a peg – and if there are for some time to come those who think the comparison with such a master is simply a gratuitous gift to Alethea Garstin… - I shall have no reply, save only to invite contemplation of her output as prolonged and intent as that devoted to her by her smallish band of intense admirers.’