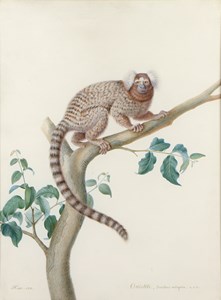 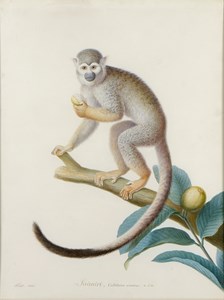 Born into a family of artists, Nicolas Huet the Younger was the eldest son and pupil of Jean-Baptiste Huet and the grandson of the animalier Nicolas Huet the Elder, and like both of them specialized in depictions of animals. The young Nicolas took part in Napoleon’s scientific and artistic expedition to Egypt between 1798 and 1801, and made his Salon debut in 1802 with several animal pictures. A gifted watercolourist and engraver, Huet developed a reputation as a natural history draughtsman. In 1804 he was appointed painter to the Muséum d’Histore Naturelle and to the Ménagerie of the Empress Joséphine, who was a collector of animal, bird and plant specimens, many of which were drawn by Huet.Among Huet’s most significant works were a series of 246 elaborate drawings on vellum - studies of mammals, reptiles, birds, insects and sea life - for the library of the Muséum d’Histoire Naturelle, published in 1808 as 'Collection de mammifères du Muséum d’Histoire Naturelle'. From 1823 until his death Huet served as Professeur d’iconographie des animaux, and he continued to exhibit at the Salons until 1827, showing mainly drawings and watercolours of animals. Apart from his official duties, Huet also made elaborate drawings of animals, usually on vellum, for private collectors such as King Friedrich Augustus II of Saxony, the military officer André Masséna, Prince d’Essling and Duc de Rivoli, and others.Writing at the end of the 19th century, one art historian noted of Huet, in comparison with his older contemporary, the natural history artist Nicolas Maréchal, that ‘The works on vellum by Nicolas Huet may be the finest after those of Maréchal; sometimes he even does just as well and better than him. If he did not have the anatomical accuracy of Maréchal, he had something more precious perhaps from an artistic point of view: the gift of life; his animals, his birds, always have their familiar attitude, with which they are characterized: they live.’