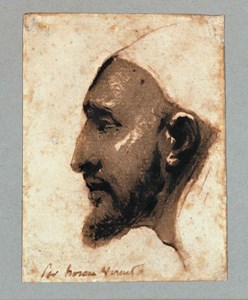 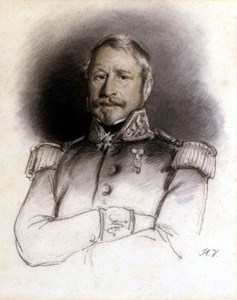 The grandson of the landscape and marine painter Claude-Joseph Vernet and the engraver Jean-Michel Moreau, and the son of the military and history painter Carle Vernet, Horace Vernet was actually born in the Louvre, where his father had a studio and lodgings. He studied with his father, from whom he was to inherit a lifelong interest in equestrian subjects, and later entered the studio of François-André Vincent. Horace assisted his father on the latter’s battle paintings before making his Salon debut in 1812 with a military painting of his own, which led to a commission from Jérôme Bonaparte, King of Westphalia and brother of Napoleon. A committed Bonapartist, Horace Vernet was to paint numerous scenes of the military victories of the Empire, many commissioned by the Duc d’Orléans, later King Louis-Philippe. (Indeed, Vernet was to earn a total of some 350,000 francs from commissions from Louis-Philippe over his career.) Such was his close association with the Empire that in 1822 two of his Napoleonic paintings were rejected by the Salon, on the grounds that they depicted subjects associated with the previous regime. (Vernet withdrew all of his paintings from the Salon that year and instead exhibited them privately in his studio, with great success.) He was, however, able to enjoy the patronage of Charles X, who in 1828 appointed Vernet director of the Académie de France in Rome, where he remained until 1834. On his return to Paris he was appointed a professor at the Ecole des Beaux-Arts, a post he retained throughout the remainder of his career. In 1837 he travelled to Algeria as an artist with the French army, the first of several trips to North Africa to record the military campaigns of the Louis-Philippe. In 1839, he visited Egypt and Palestine in the company of his nephew Frédéric Goupil-Fesquet, making some of the first daguerreotypes of the sights of Alexandria, Cairo and Jerusalem. Competent at a variety of styles, Vernet is best known today for his many large-scale, grandiose battle scenes and military subjects, although he also produced genre, Biblical and historical scenes. He was influenced by the work of Théodore Géricault and other artists of the Romantic movement and in 1855 was one of four artists - alongside Ingres, Delacroix and Gabriel-Alexandre Decamps - honoured with retrospective exhibitions of their work at the Exposition Universelle that year.