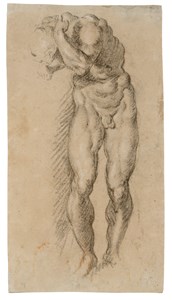 Jacopo Comin, who earned his nickname Tintoretto as a result of his father’s profession as a tintore, or cloth dyer, is thought to have trained in the studio of Titian. By the end of the 1540’s he had established a large and busy workshop of his own in Venice, and throughout his career he rarely left the city. His oeuvre was extensive, comprising altarpieces and other paintings for Venetian churches, vast pictorial cycles for confraternities or scuole, and narrative pictures for the Palazzo Ducale and other civic buildings, as well as portraits and easel pictures for private patrons in Venice and abroad. He was a gifted and prolific draughtsman, with a particular interest in the study of the male nude form. After his death in 1594, his drawings seem to have been retained in his workshop, run by his sons Domenico and Marco, before eventually coming into the possession of his son-in-law, Sebastian Casser.