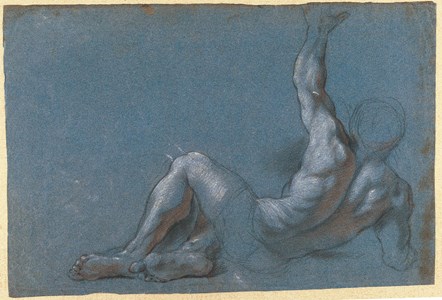 The son and pupil of the painter Noël Coypel, Antoine Coypel accompanied his father to Italy at the age of eleven, when the latter was named director of the Académie de France in Rome in 1672. It was in Rome that he continued his artistic education, making copies after the Antique and the masterpieces of the High Renaissance and the Roman Baroque, meeting Carlo Maratta and Gianlorenzo Bernini and winning a prize for drawing at the Accademia di San Luca. On his return to Paris in 1676 Coypel completed his training at the Académie Royale. One for his first important commissions was for an altarpiece for Notre-Dame in Paris, painted in 1680. Reçu at the Académie at the age of twenty, Coypel enjoyed a brilliant official career. Appointed premier peintre to the Duc d’Orléans in 1685, he was to enjoy the patronage of the Orléans family for several years. He received the commission for his most important work in 1701 from Phillipe II, Duc d’Orléans, who tasked the artist with the decoration, now destroyed, of the Galérie d’Enée of the Palais Royal, painted between 1702 and 1705. In 1709 he painted the chapel at Versailles, having worked at the Grand Trianon several years earlier. In 1710 Coypel was appointed garde des peintures et dessins du roi, and rose to the directorship of the Académie Royale in 1714. The following year he was named premier peintre de la roi, or First Painter to the King, and also given curatorial responsibility for the Royal collection of drawings. In the last decade of his career, weakened by illness, he painted relatively little. Nevertheless, Coypel was, with Charles de La Fosse, Jean Jouvenet and Louis de Boullogne, among the artists whose work best exemplifies the transition in French painting from the cold and austere manner of the reign of Louis XIV to the lighter, more lyrical style of the 18th century. Antoine Coypel was a superb draughtsman, often working in a combination of red, black and white chalks. As Pierre Rosenberg has noted of another drawing by the artist, ‘the vigour of the execution, the powerful composition and the richness of the technique…make Coypel one of the foremost draughtsmen of his time.’1 Some five hundred drawings by the artist survive today, made up largely of figure studies and compositional drawings, many of which are related to known or documented paintings. By far the most substantial group of drawings by Coypel, many in the artist’s favoured technique of trois crayons, is that in the Louvre, numbering 280 sheets; the bequest of the artist’s son Charles-Antoine to the King in 1752. Other groups of drawings by the artist are in the Ashmolean Museum in Oxford and the Nationalmuseum in Stockholm. Antoine Coypel was also a collector of drawings, owning nearly a hundred studies by the Carracci, among works by other artists.