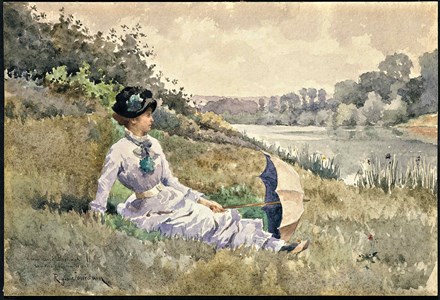 Although heir to a prestigious family clothing business, Roger-Joseph Jourdain chose to embark on a career as a painter. He was a pupil of Alexandre Cabanel and Isidore Pils at the Ecole des Beaux-Arts in Paris, and made his Salon debut in 1869. A fervent admirer of Manet, he embarked on a trip to Spain, where he made copies after the paintings of Velasquez. At the celebrated Parisian salon of his half-sister, Marguerite de Saint-Marceaux, Jourdain met a number of artists, writers and composers, including John Singer Sargent, Henri Regnault, Marcel Proust, Colette, Gabriel Fauré and Claude Debussy. Although he briefly flirted with painting Orientalist subjects, he soon developed a speciality as a painter of bucolic genre scenes, and was particularly fond of the theme of the Parisian bourgeoisie at leisure. His genre paintings often depict figures promenading along the Seine at Bougival, or bathing on the Normandy coast, where Jourdain often painted at the little port of Villerville in Calvados. He became a member of the Société des Artistes Français in 1883 and won medals at the Exposition Universelle of 1889 and the Exposition Universelle of 1900. An exhibition of Jourdain’s work was held in 2005 at the Musée Municipal in his native town of Louviers, which houses a fine collection of his work.