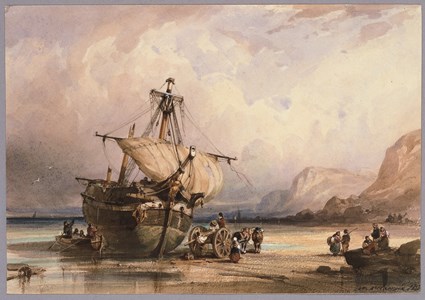 A native of Boulogne, Auguste Delacroix is best known as a painter of Breton genre scenes and marine subjects. He also produced a number of Orientalist works, notably a series of drawings and watercolours made during a visit to Morocco and Algeria around 1849. Delacroix exhibited paintings, drawings and watercolours at the Salons between 1835 and 1865, winning a third-class medal in 1839, a second-class medal in 1841 and a first-class medal in 1846. Late in his career, around 1865, Delacroix settled in Italy. He began suffering from paralysis, and his late works were painted with his left hand. Nevertheless, his reputation as a watercolourist was such that he was commissioned to contribute illustrations to the Nouveau traité tout practique de lavis et de la peinture à l’aquarelle; a manual on watercolour technique published in Paris in 1872, a few years after the artist’s death. Works by Auguste Delacroix are today in the museums of Calais, La Rochelle, Pontoise, Reims and Cologne.