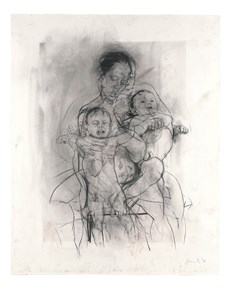 Born in Cambridge in 1970, Jenny Saville studied at the Glasgow School of Art, graduating in 1992 with a final show in which every painting was sold. While still at art school, she took part in the British Portrait Competition at the National Portrait Gallery in London in 1990 and in the Van Gogh Self Portrait Competition at the Burrell Collection in Glasgow. Shortly after her graduation, the artist’s work came to the attention of the collector Charles Saatchi, who purchased several of her paintings. Between 1992 and 1993, Saatchi commissioned Saville to produce a number of paintings that were later included in the exhibition Young British Artists III at the Saatchi Gallery in London in 1994, where the work of the twenty-three year old artist first received a significant amount of critical attention. Working on a very large scale, Saville created paintings characterized both by an abiding interest in the naked female body and the sheer physicality of oil paint. A desire to learn more about anatomy led to an opportunity, during a stay in America in 1994, to make a careful study of cosmetic surgical procedures. In 1995 and 1996 she collaborated with the photographer Glen Luchford on a series of paintings of a female model pressed against a sheet of glass; these works were exhibited at the Pace McGill Gallery in New York in 1996. Saville’s paintings were included in the controversial exhibition Sensation: Young British Artists from the Saatchi Collection at the Royal Academy in London in 1997, alongside the work of Damien Hirst, Chris Ofili, Tracey Emin and others, and this brought her work to the notice of the public at large. Her paintings were also included in the exhibition The Nude in Contemporary Art at the Aldrich Museum of Art in Ridgefield, Connecticut in 1999. In 1998 a solo exhibition was mounted at the Gagosian Gallery in New York, followed by another in 2003. Saville was appointed a lecturer of figure painting at the Slade School of Fine Art in London, where she taught between 2000 and 2006. A solo museum exhibition of her work was mounted at the Museo d’Arte Contemporanea in Rome in 2005, and the following year she completed a commission from the Italian collector Carlo Bilotti for three paintings to decorate the chapel of the Museo Carlo Bilotti in Rome. These were installed in 2006 alongside other site-specific works commissioned for the chapel from Damien Hirst and David Salle. In 2007 she was elected to the Royal Academy. Once described by the art historian Linda Nochlin as ‘the most interesting and exciting painter of our times’, Jenny Saville’s abiding interest in the human body, as well as her visceral painting style, have often seen her work regarded in the context of such 20th century masters of figurative painting as Francis Bacon and, in particular, Lucian Freud. Throughout her career, however, she has also looked to the art of the Old Masters - artists such as Leonardo, Michelangelo, Rembrandt, Vermeer and Velásquez - for inspiration. After working for several years between studios in London and Palermo in Sicily, Saville today lives and works in Oxford. In 2011 and 2012 a retrospective exhibition of her paintings and drawings was held at the Norton Museum of Art in West Palm Beach, Florida, and the Modern Art Museum in Oxford.