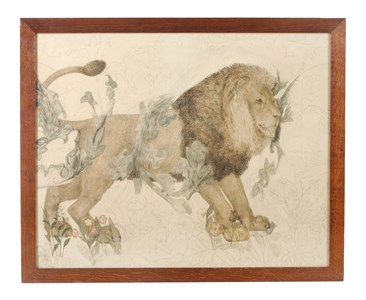 An architect and draughtsman, Phillip Speakman Webb worked closely with William Morris when both young artists were employed in the architectural practice of George Edmund Street. The two remained lifelong friends, colleagues and collaborators. As a draughtsman, Webb had a particular penchant for natural history, and in particular studies of animals. However, it was his work as an architect that drew him to Morris, for whom he designed Red House, competed in 1860 and Webb’s fist independent commission as an architect. Webb also designed the furniture, glassware, metalwork and stained glass for the interior of the house. In 1861 Webb became one of the founding partners of Morris, Marshall, Faulkner & Co., a firm devoted to the decorative arts and described in their prospectus as ‘Fine Art Workmen in Painting, Carving, Furniture & Metals’. The firm became Morris & Co. in 1875. Webb continued to work closely with Morris on various projects until the latter’s death in 1896. Among the Morris & Co. products to which Webb contributed were stained glass designs, for which his studies of animals were particularly popular.