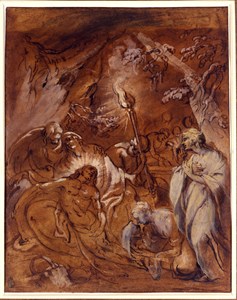 Vincenzo Spisanelli (sometimes Spisano or Pisanelli) was a pupil and follower of Denys Calvaert at the end of the master’s career in Bologna, and like many of his contemporaries there was also strongly influenced by the work of the Carracci. The Bolognese biographer Cesare Malvasia mentions Spisanelli only with reference to his character and personality, without discussing his works or career in any detail, and indeed the artist remains little known and barely studied today. He seems to have worked mainly in Bologna, painting altarpieces for churches in the city and the surrounding region, and several works by the artist survive in Bolognese churches and collections. These include a painting of The Death of the Virgin in the church of San Domenico and a Baptism of Christ painted for the church of San Francesco and later transferred to San Giorgio, as well as an Adoration of the Shepherds in the Museo Davia Bargellini in Bologna. Paintings by Spisanelli may also be found further afield; in Ferrara, Imola, Modena, Forlì and Rimini. His son and pupil Ippolito was also a painter, although he died not long after his father.