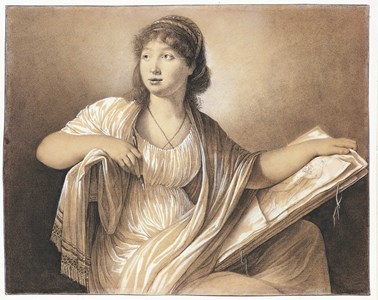 Both Anne Guéret and her older sister Louise-Catherine Guéret were active as artists, working at the end of the 18th century and the beginning of the 19th century. Orphaned as children, the sisters were adopted by the playwright Michel-Jean Sedaine, who introduced them to the painters Henri-Pierre Danloux and Jacques-Louis David, with whom they both trained as artists. The sisters made their Salon debut in 1793, with Anne showing the present drawing and her sister three works. Anne Guéret continued to exhibit at the Salons until 1801, showing mainly portraits. In 1799 the two Guéret sisters, who were also accomplished musicians, submitted a double self-portrait to the Salon. Henri-Pierre Danloux painted a small-scale portrait of Anne Guéret, after her marriage to a M. Bernier, which remained in his possession until his death, and still belonged to his descendants in the early years of the 20th century. (In his account of the life and work of Danloux, Roger Portalis notes of the painter that his feelings for Anne Guéret were such that he always kept an image of her with him.) Danloux is also known to have produced a drawing of Anne’s sister Catherine, who is also thought to have been the sitter for a full-length portrait, dated 1793 and attributed to David, in the collection of the Musée des Beaux-Arts in Rouen.