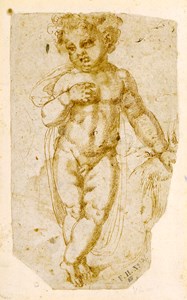 One of the leading sculptors of the Cinquecento in Italy, Baccio Bandinelli was profoundly influenced by the work of Michelangelo, a lifelong rival whose fame he sought to emulate throughout his career. Although he received several important Roman commissions, he worked in Florence for much of his life, where he enjoyed the patronage of the Medici. There his major public sculptural commissions included a statue of Saint Peter for the facade of the Duomo, the Hercules and Cacus for the Piazza della Signoria and the monument to Giovanni delle Bande Nere for the church of San Lorenzo. He also sculpted a figure of Orpheus for the courtyard of the Palazzo Medici, as well as sculptures for the Sala dei Cinquecento in the Palazzo Vecchio and the high altar of the Duomo. Bandinelli also worked occasionally as a painter, notably receiving a commission from Pope Clement VII for two frescoes for the Florentine church of San Lorenzo, though the project was eventually abandoned. In Rome, he designed and executed the tombs of the Medici popes Leo X and Clement VII. In 1546 he began work on an elaborate marble choir screen, ornamented by statues and reliefs, for the Duomo in Florence; an immense project that occupied him, on and off, for the remainder of his career. Like every sculptor of his age, however, Bandinelli remained in the lifelong shadow of Michelangelo, whose mastery of technique he was never quite able to equal. Bandinelli’s contemporary fame was based as much on his drawings as on his sculpture, and Vasari notes of him that he was ‘allora disegnatore molto stimato’. He was a prolific draughtsman, and more studies by him survive than by any other 16th century sculptor save Michelangelo. (He is also known to have made drawn copies after the work of such earlier sculptors and painters as Giotto, Masaccio, Desiderio da Settignano, Donatello, Fra Bartolomeo and Leonardo, as well as Michelangelo.) Indeed, drawing was the foundation of Bandinelli’s art, as was noted in the Memoriale - long thought to be the artist’s autobiography but recently identified as an apparent forgery composed by his grandson – where he is claimed to have stated that ‘All my concentration was fixed on drawings...it is above all in that activity that I have prevailed.’ Certainly, the artist valued his drawings highly, and he seems not to have parted with many of them, insisting that his heirs retain them after his death. Bandinelli’s drawings continued to be admired by collectors long after the artist’s death, as evidenced by a comment in the 1775 sale catalogue of drawings from the collection of Pierre-Jean Mariette; ‘Baccio’s manner of drawing is very erudite: he understood perfectly the structure of the human body as well as all its movements...’ The largest single collection of drawings by Bandinelli is today in the Uffizi, and other significant groups are in the Louvre and the British Museum.