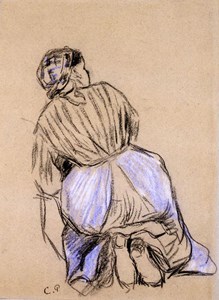 Born on the island of St. Thomas in the Danish West Indies and raised in Paris, Camille Pissarro was essentially self-taught as an artist, with little formal training. In 1859 he enrolled at the Académie Suisse, where he met Paul Cézanne, Armand Guillaumin and Claude Monet. He exhibited at the Paris Salons throughout the 1860’s, although his paintings received little critical or public attention and he sold very few. By 1866 he had settled in the town of Pontoise, where he was to work - apart from a brief stay in London during the Franco-Prussian war - until 1884, when he moved to Éragny-sur-Epte. The only artist to participate in all eight Impressionist exhibitions, Pissarro nevertheless remained somewhat less well known than many of his fellow painters. Indeed, as he wrote in a letter of 1895, ‘Like Sisley, I remain in the rear of Impressionism’.Along with Edgar Degas, Camille Pissarro was the most prolific draughtsman among the Impressionists, with a surviving corpus of drawings far greater than those of Edouard Manet, Auguste Renoir, Claude Monet or Paul Cézanne. He drew in pencil, charcoal, watercolour, pastel and gouache, as well working with various forms of printmaking. As has been noted by John Rewald, ‘with real passion he explored the many possibilities of these methods, achieving in each an uncontested mastery, not so much because of technical proficiency as because he knew how to use each medium for the purpose of expressing what he wished to say.’ Pissarro once wrote to his son that ‘It is only by drawing often, drawing everything, drawing incessantly, that one fine day you discover to your surprise that you have rendered something of its true character.’ Indeed, as Christopher Lloyd has noted, ‘A close study of Pissarro’s drawings shows that, like Degas, he prepared his compositions with the utmost precision and care before beginning work on the canvas. The method of preparation was not always a question of plotting the design ready for transference on to the canvas itself, but of building up an impressive range of visual information that could be introduced or omitted as the painter refined his thoughts about a particular composition...What emerges from all this is that Pissarro is an impressionist painter who uses drawings in a strictly traditional manner, but, as in his paintings, what makes this connection particularly interesting is the contrast between the orthodoxy of his approach and the radicalism of the results.’ Pissarro seems to have drawn much more in the last two decades of his career than he had before; indeed almost three–quarters of the artist’s extant drawings may be dated to the 1880s and 1890s. Also particularly noticeable in his drawings at the end of the 1870s and the early 1880s is an increased interest in studies of the human figure.