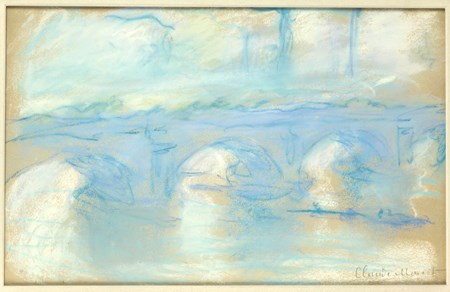 Claude Monet began working in pastel from his earliest years as an artist in Normandy, and continued to do so until the very beginning years of the 20th century. Around 110 pastel drawings by the artist are known today, almost all of which are signed, fully developed compositions, rather than quick sketches. That the artist considered his pastel landscapes as significant works in their own right is evident as early as the first Impressionist exhibition of 1874, when he chose to exhibit seven of his pastels alongside five paintings. Throughout his career Monet sold pastel drawings to collectors and gave them as gifts to close friends, and they continued to be avidly acquired by dealers and collectors before and after his death. As Richard Kendall has noted, ‘Monet’s lifelong willingness to release his pastels into the larger world is crucial in defining their status: these were manifestly public images, not secretive experiments…In the last quarter-century of his life, these small, radiant images made their contribution to his growing reputation in a number of ways.’ Nevertheless, Monet’s pastels are today far less well known, and have been much less studied, than his paintings. The vast majority of these vibrant works on paper remain in private hands today, and only a few are in museum collections.