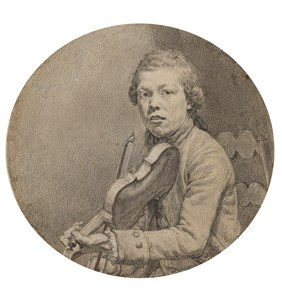 The artist Hilaire Ledru (or Le Dru) seems to have been largely self-taught. He studied in Douai (and probably in Antwerp in 1789) and made his Salon debut in 1795. Although he worked as a painter, he was best known for his portrait drawings, executed with a precise chalk manner known as à la manière noire (or pointillé); the practice using the newly-developed Conté crayons to achieve stippling effects akin to the contemporary English mezzotints which were much in vogue in Paris. Drawings in this technique were very fashionable at the end of the 18th century, made particularly popular by the works exhibited at the Salons by the artist Jean-Baptiste Isabey. Like Isabey, Ledru was among the finest practitioners of this new medium. (Indeed, his exhibited drawings à la manière noire were sometimes mistaken for those of the better-known Isabey). Ledru achieved a considerable measure of success with his full-length portrait drawings of eminent military figures, such as portraits of Generals Bonaparte and Beurnonville, exhibited at the Salon of 1796, and drawings of Marshal Bernadotte and General Scherer, shown at the Salon of 1798. These highly finished portrait drawings were readily suited for reproduction as engravings, and several were indeed later published as prints. Ledru continued to exhibit both portraits and genre scenes at the Salons until 1824, and also took part in exhibitions in Lille and Douai. A fine example of Ledru’s painting style is an 1808 portrait of a young girl making a drawing of an antique bust, which was formerly in the collection of J. P. Heseltine in London.