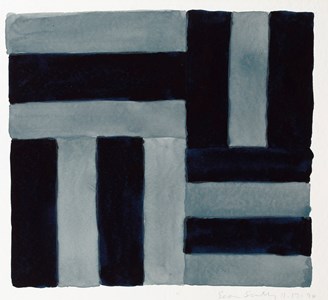 Born in Dublin in 1945, Sean Scully settled as a young child in North London with his family. Rejected by eleven other art schools, he eventually enrolled in Croydon College in London in 1965, transferring to the University of Newcastle three years later. Scully was nominated for the Turner Prize in 1989 and 1993, and has exhibited widely in Europe and America. His work takes the form of abstract paintings based on regularly spaced geometrical elements, but with a concurrent sense of rhythm and imbued with an inherent spirituality. As the artist has described his approach to painting, ‘it is metaphysical on some level. It’s certainly religious and spiritual. I think it has a very strong spiritual dimension. And I pull in a lot of other threads to my work. Obviously there’s simple geometry, simple drawing, all the way through it. And there’s the rhythm, the kind of rhythm you find in weaving and folk arts all over the world – in Morocco and other parts of Africa, in Ireland, in Lapland.’ Scully works today in studios in Germany, in the Bavarian countryside about an hour from Munich, as well as in Barcelona and New York. Paintings and drawings by Scully are today in the collections of the Museum of Modern Art and the Guggenheim Museum in New York, the National Gallery of Art and the Smithsonian American Art Museum in Washington, D.C., the Fine Arts Museums of San Francisco, the Tate Gallery in London, the Irish Museum of Modern Art and the Hugh Lane Gallery in Dublin, the National Gallery of Australia in Canberra and other private and public collections.