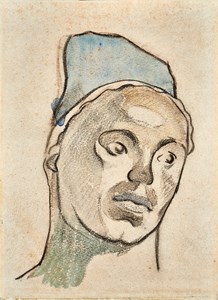 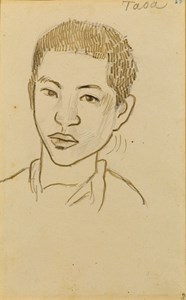 For Paul Gauguin, near the end of his career, the practice of drawing seems to have been an intensely personal and private act, quite apart from his relative isolation in the South Seas. In his correspondence, he frequently referred to his drawings as ‘documents’, and kept many of the studies he made during his first trip to Tahiti to use as a stock of motifs for his paintings. Furthermore, he appears not to have intended his drawings to be sold or shown to others. As he wrote in 1903, shortly before his death, ‘A critic at my house sees some paintings. Breathing heavily, he asks for my drawings. My drawings? Never! They are my letters, my secrets.’Gauguin was not, however, a prolific draughtsman, and excluding sketchbook pages, less than a hundred independent drawings survive from a career that lasted less than thirty years. While a number of drawings may have been lost or destroyed, particularly towards the end of his career when he was living in French Polynesia, it seems that, on the whole, Gauguin’s working method laid less emphasis on preparatory drawings than was the case for many of his contemporaries.