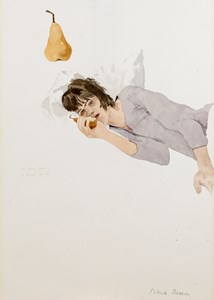 Born in Dublin, Patrick Procktor was brought up in London and Brighton. He studied at Highgate School, where his art master was the Welsh landscape painter Kyffin Williams, and after two years in the Royal Navy entered the Slade School of Art in 1958. In 1963, a year after graduating from the Slade, he had his first exhibition at the Redfern Gallery in London, which was a great success. Two further one-man exhibitions at the Redfern Gallery, in 1965 and 1967, cemented his reputation, and Procktor was to show at the Redfern throughout his career. Friendly with such contemporaries as R. B. Kitaj and David Hockney, Procktor travelled with the latter to America in 1965. He was to travel a great deal throughout his career, visiting Italy and Greece in 1962, India and Nepal in 1970, South Africa in 1974, and China in 1980. In 1983 he received a commission from the Imperial War Museum for studies of British soldiers serving in Belize, while in 1985 he was invited by the British Council to produce a series of watercolours recording the visit of Queen Elizabeth II to Portugal. Procktor also produced a number of prints, including a series of aquatints and etchings illustrating Samuel Taylor Coleridge’s Rime of the Ancient Mariner, executed in 1976 and published as a book two years later. He also produced a number of theatrical designs, notably for a production of Turandot at the Royal Opera in 1983, a project never realized. Procktor published an autobiography in 1991, and was elected to the Royal Academy in 1996.Procktor was particularly admired as a watercolourist. His earliest watercolours date from 1966, at a time when the medium was quite unfashionable. He first exhibited his watercolours – mostly portraits – in 1968, and continued to do so regularly from then on, his subject matter encompassing both portraits and landscapes. As a recent critic has noted, ‘Though Procktor worked with oils and acrylics, he also used watercolour extensively, and very largely the techniques he learned for this deeply unfashionable medium measured the distance between his work and that of his contemporaries.’ Of his watercolour portraits, Procktor himself noted that ‘I have never considered myself a portrait painter, but a painter of pictures of people.’