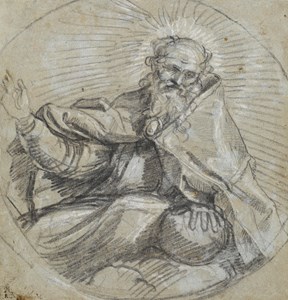 Arguably the least well known of the three Carracci, Agostino Carracci has long been overshadowed by his more famous younger brother Annibale and cousin Ludovico. As a painter, Agostino Carracci studied with Prospero Fontana and Bartolomeo Passarotti, and was also trained as an engraver in the studio of Domenico Tibaldi, producing his first engravings in the early 1580’s. Agostino worked alongside Annibale and Ludovico on the frescoed friezes of the Palazzo Fava in Bologna, completed in 1584. By now firmly established as a successful printmaker, Agostino also received a handful of commissions for church altarpieces. Following a stay to Venice, he again collaborated with his brother and cousin, this time on the decoration of the Palazzo Magnani in Bologna around 1590. In the mid 1590’s he joined Annibale in Rome, where the latter was engaged on the decoration of the galleria of the Palazzo Farnese. While the bulk of the decorative scheme of the Farnese Gallery was the work of Annibale, Agostino was responsible for the design and execution of two prominent frescoes on the long walls of the room; the Cephalus and Aurora and the so-called Galatea. After an argument with his brother, however, Agostino left Rome in 1599 for Parma. There he was commissioned by Duke Ranuccio Farnese to paint frescoes for the Palazzo del Giardino, but died before the project was completed.