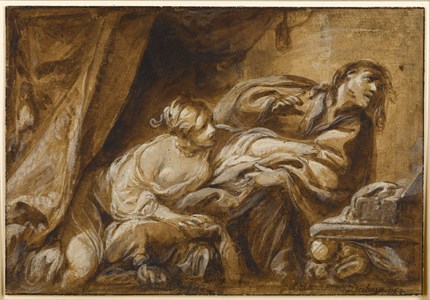 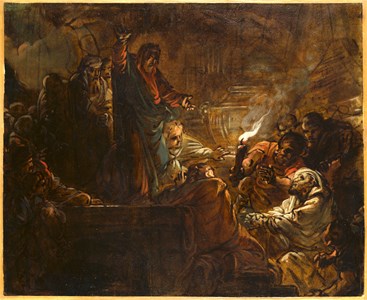 Jean-Baptiste Deshays received his initial artistic training with Hyacinthe Collin de Vermont and Jean Restout. After winning the Prix de Rome in 1751, he studied for three years at the Ecole des Elèves Protégés and spent a further four years at the Académie de France in Rome. Agrée at the Académie Royale in 1758, Deshays was reçu the following year with a painting of Hector Laid on the Banks of the Scamander, which was exhibited at the Salon. (He exhibited a further two times at the Salon before his untimely death at the age of thirty-five, and again posthumously in 1765.) Deshays made a particular speciality of paintings of religious subjects, and received important commissions for such churches as Saint-Roch in Paris, Saint-Pierre in Douai and Saint-André in Rouen, for which he painted three major altarpieces between 1758 and 1761. He also designed two sets of tapestry cartoons for the manufactory at Beauvais. As a painter, Deshays employed a loose and fluid manner that owed much to the example of the Baroque artists he had studied in Italy, as well as to François Boucher (whose daughter he married in 1758) and Jean-Honoré Fragonard. Writing of the Salon of 1761, Denis Diderot praised his work, noting that ‘This painter, in my opinion, is the nation’s foremost painter; he has more warmth and genius than Vien; he rivals Van Loo in drawing and color...There is strength and austerity in his palette; he conceives [the most] striking subjects.’1 Deshays achieved considerable success during his brief career, which lasted only about seven years before his early death. Some six hundred drawings were dispersed at the posthumous sale of Deshays’ studio.