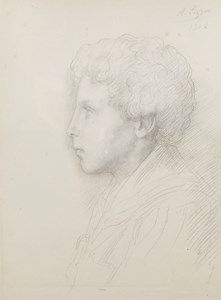 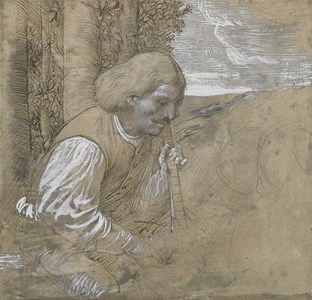 Apprenticed to a house painter, in his spare time Alphonse Legros studied drawing at the School of Fine Arts in Dijon. He later moved to Paris, where he entered the Petite École de Dessin (later the École des Arts Décoratifs), run by Horace Lecoq des Boisbaudran. Among his fellow pupils was Auguste Rodin, who years later recalled that ‘My drawings were absolutely impersonal; those of Legros, on the contrary, were already a master’s.’ Legros first exhibited at the Salon of 1857, and two years later his painting Angelus was greatly admired by the critic Charles Baudelaire. Although Legros was, in essence, a somewhat conservative artist, his friends included such nonconformist painters as James McNeill Whistler, Edgar Degas and Camille Pissarro, and it was Whistler who encouraged Legros to settle in London, which he did in 1863. He was able to support himself by teaching a class in printmaking at the South Kensington Museum (now the Victoria and Albert Museum) at the recommendation of the painters Dante Gabriel Rossetti and G. F. Watts. Rossetti also introduced him to other artists, such as Edward Burne-Jones, as well as a number of important collectors, notably Alexander Constantine Ionides. He later succeeded Sir Edward Poynter as professor of design at the Slade School of Art at University College, a post he held from 1876 to 1894. In England Legros began devoting more and more time to his work as a printmaker, and in the mid 1880’s he and Francis Seymour Haden founded the Society of Painter-Etchers. Prolific as an etcher, he produced several hundred prints. Legros was to live in London for almost his entire career, apart from a period of some six years in a cottage in Brasted Chart in Kent, between 1899 and 1905. Nevertheless, Legros continued to exhibit, if only occasionally, at the Paris Salons. He produced a large number of painted and drawn portraits throughout his career, and it is as a portraitist that Legros is perhaps best known today. Among his sitters were such prominent figures as Cardinal Manning and Charles Darwin, as well as artists such as Watts, Rodin and Alfred Stevens.Legros was a superb draughtsman, and employed a wide range of media, including pen and ink, lead pencil, metalpoint (both gold and silver), watercolour, chalk and charcoal. His drawings were greatly admired by such contemporaries as Edgar Degas, who is said to have hung a drawing of hands by Legros between two drawings by Ingres in his bedroom.Léonce Bénédite, who organized an exhibition of the artist’s work at the Musée de Luxembourg in Paris in 1900, wrote of Legros that ‘His entire work, whether painted, drawn, engraved, or sculptured, represents enormous achievement, in which exceptionally fine results abound. And as I write these lines, the quiet and simple artist, whose glory two nations share, is quietly sitting at his working table in the solitude of his little country cottage near Brasted, engaged in increasing his splendid store, without thought of the noisy world outside, or of the laurels which shall be showered on him, with the serenity of the sage who esteems labour itself as the sweetest fruit of his travailing.’