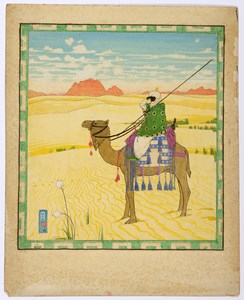 Although he studied at the Birmingham School of Art, Maxwell Ashby Armfield was largely self-taught as an artist. Under the influence of Joseph Southall, he began experimenting with painting in tempera, although he only began taking up the medium with more seriousness around 1910. In 1902 Armfield settled in Paris, where one of his small paintings was acquired by the State for the Musée de Luxembourg. His first significant one-man exhibition was held at the Carfax Gallery in London in 1908, and a review in The Times noted the artist as ‘a man of originality and promise…[he] is said to be very young: but he is also very versatile…his gifts are undoubted.’ This exhibition was followed two years later by a show at the Leicester Galleries in London, and other gallery exhibitions elsewhere. Armfield showed at the Royal Academy, the New English Art Club and the Royal Watercolour Society. Armfield also exhibited in America, where he lived for seven years between 1915 and 1922. An exhibition of twenty-one paintings, entitled America East to West, was held in London soon after his return, followed three years later by Armfield’s account of his travels, published as An Artist in America. A prolific and accomplished illustrator and decorative artist, he also found the time to publish a number of books of poetry, travel accounts and technical guides such as the Manual of Tempera Painting, published in 1930. Although his work was largely forgotten after the Second World War, Armfield lived to see a reassessment of his oeuvre take place in the 1970’s. Paintings by the artist are in the collections of the Tate, the Birmingham Museums and Art Gallery, the Southampton City Art Gallery, and elsewhere.