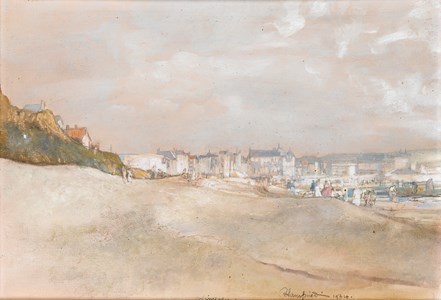 Born at Ville Brée in the parish of St. Martin on the island of Jersey, Edmund Blampied began his formal artistic training in 1903, when he was admitted as a student at the Lambeth School of Art in London. He eventually obtained a scholarship to continue his studies, while at the same time working for a number of London newspapers as an illustrator. By December 1911 Blampied had begun working independently as an illustrator for magazines and books. He also took up the art of etching, learning the technique at the London County Council School of Photo-Engraving and Lithography, and soon became proficient – and, indeed, quite prolific - as a printmaker, with a particular fondness for the exacting medium of drypoint. After the First World War, in which served in a non-combatant role in the Royal Jersey Militia, Blampied entered into a contract with two dealers in London, the Leicester Galleries and Lefevre and Son, who published his etchings and drypoints and gave him a number of one-man shows. He also began producing lithographs, the subjects of which, like his other prints, tended towards scenes of farm labourers and horses. In 1920 Blampied was elected to the Royal Society of Painter-Etchers and Engravers, becoming a fellow the following year. Yet while his etchings, drypoints and lithographs earned him a substantial reputation, he continued to supplement his income with commissions for magazine and book illustrations. These commercial works he would usually sign as ‘Blam’, reserving his full name for his own original compositions.In the late 1920’s Blampied, accompanied by his wife Marianne, began spending a considerable amount of time outside England, embarking on a series of travels throughout France, Spain and North Africa. He also began to paint in oils and watercolours, producing works which attracted the interest of a new group of collectors, many from America. With the decline in the etching market in the 1930’s, Blampied began to concentrate more on paintings, drawings and watercolours, several of which were exhibited in London in 1935 and in Glasgow the following year, while still others were shown in two exhibitions in New York in 1937. In 1938 the Blampieds returned to Jersey, remaining there throughout the German occupation of the island in World War II. During this period a large and comprehensive exhibition of the artist’s work as printmaker, painter and draughtsman was presented at the Print Club of Cleveland, Ohio in 1941. Shortly after the end of the war a retrospective exhibition of Blampied’s paintings and drawings was held in his native Jersey, and further exhibitions of his work were held in America in the 1950’s. Works by Blampied are today in the collections of the British Museum and the Victoria and Albert Museum in London, the Boston Public Library and the Museum of Fine Arts in Boston, the Cleveland Museum of Art and elsewhere.