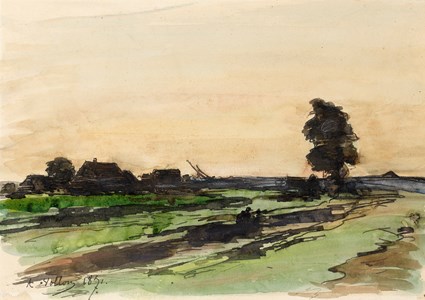 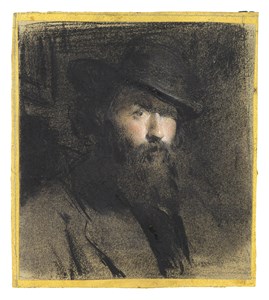 Antoine Vollon enrolled in the Ecole des Beaux-Arts in his native Lyon in 1851, studying printmaking and winning a silver medal for engraving the following year. By 1859 he had settled in Paris, where he became a disciple of Théodule Ribot, François Bonvin and other painters of the Realist circle. Self-taught as a painter, Vollon first exhibited at the Salon of 1864, having been included in the so-called Salon des Refusés the previous year, alongside Edouard Manet, Henri Fantin-Latour and James McNeill Whistler. He soon came to achieve a considerable measure of success as a painter of landscapes, interior scenes and, in particular, still life subjects. In this latter field his works were evocative of the still life paintings of Jean-Baptiste Chardin, as well as certain Dutch 17th century painters and, among his contemporaries, Manet. Vollon was particularly admired for the painterly effects and technical mastery of his canvases. His contributions to the annual Salons were widely praised by critics, and several paintings were purchased by the State. In 1879 Edmond Renoir, brother of the Impressionist painter, organized an exhibition of Vollon’s work at the offices of the magazine La Vie Moderne; this was to be in fact the artist’s only retrospective exhibition in his lifetime. Despite the success he achieved in his career, culminating in his election to the Institut de France in 1894, Vollon was almost completely forgotten after his death. A posthumous exhibition of his work at the Ecole des Beaux-Arts, planned shortly after his death, was never held. His son, Alexis Vollon (1865-1943), was also an artist.