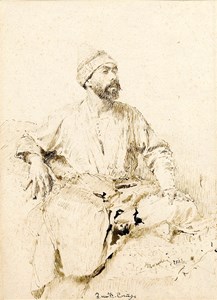 Domenico Morelli studied at the Accademia di Belle Arti in Naples, and in 1848 won a scholarship to study in Rome. Later that year he took part in the insurrection against the Bourbon rule in the city, leading to a brief period of imprisonment. In 1850 he visited Florence, where he befriended several of the Macchiaoli artists, and also made several trips to Paris between 1854 and 1867. During the 1850’s he produced some of his most significant works, and his painting of The Iconoclasts was widely praised when it was exhibited in 1855. Among his paintings of this period are scenes from Italian literature and history, religious subjects and the occasional portrait. Morelli was appointed a professor at the Accademia in Naples in 1854, where among his pupils was Francesco Paolo Michetti, and in 1870 also began teaching at the Accademia in Florence. In 1874 he met the Spanish artist Mariano Fortuny, whose style was to have a particular influence on both his paintings and drawings. The 1880’s found Morelli painting mostly religious subjects, often tinged with a form of mysticism. At his death in 1901, the contents of his studio were purchased by the Italian state, and are today in the collection of the Galleria Nazionale d’Arte Moderna in Rome.Domenico Morelli’s draughtsmanship is characterized by rapid, short pen strokes with a minimum of shading. His pen style as a draughtsman was largely developed by around 1865 and remained relatively constant for the rest of his career. A significant group of drawings by Morelli is in the Galleria Nazionale d’Arte Moderna in Rome, while another important group was presented by a descendant of the artist to the Galleria d’Arte Moderna in Turin in 1998.