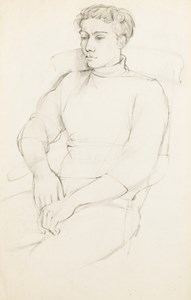 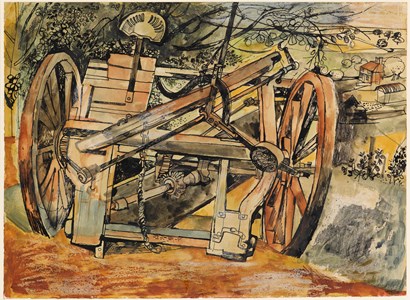 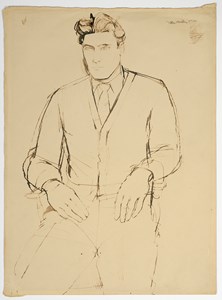 Although he had only a relatively brief career before his death at the age of thirty-nine, John Minton was enormously prolific and achieved a great deal of success in his lifetime. Between 1945 and 1956 he had eight one-man shows, mainly at the Lefevre Gallery in London, as well as taking part in a number of group shows and the Royal Academy Summer exhibitions. Alongside his output as a painter and draughtsman, he provided numerous illustrations for books, book jackets, magazines and advertisements, and also designed posters, wallpaper and stage sets. While he enjoyed considerable early success, by the 1950’s Minton’s work was becoming overshadowed by that of other artists in his circle, notably Lucian Freud and Francis Bacon. As a friend of his later wrote, ‘He saw himself as overtaken by fashions in art – abstract expressionism among others – for which he had no liking. While others of his contemporaries – Lucien Freud, Francis Bacon, Keith Vaughan - held their ground and came through, Minton saw himself as obsolete, as eccentric and old-fashioned as Edward Lear. He could not come to terms with new developments and he lost faith in his own talent…He was, I suppose, one of those kingfisher-like specimens whose bright plumage briefly glinted then was gone. It might, perhaps, have been different in other circumstances; a little more patience and he could have survived the disorienting shifts in taste.’ Minton devoted much of his later career to teaching, in particular at the Royal College of Art, and was a popular and inspirational figure among his students. As Frances Spalding has written of him, ‘Minton’s virtuoso performances with pencil or pen and ink commended him as a teacher. His students aspired to his dexterity and adopted his devices.’ Minton died, by his own hand, in January 1957.