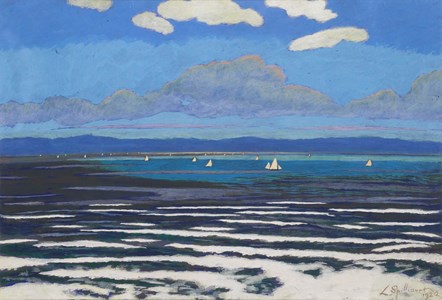 The son of a wealthy perfumer, Léon Spilliaert from an early age suffered from acute anxiety, stomach disorders and insomnia. An introspective and sensitive youth, he would wander the deserted streets, quays and beaches of his native Ostend throughout the evening, and in later years produced countless drawings, pastels and watercolours of the fog-bound city at night. Having shown a talent for drawing from an early age, Spilliaert was largely self-taught as an artist, his only formal training being a few months at the Academy in Bruges. At the age of twenty-one he was employed by the publisher and collector Edmond Deman as an assistant, and settled in Brussels. Deman was to become the young Spilliaert’s mentor and champion, nurturing his talent and introducing him to the flourishing artistic scene in Brussels. At the end of January 1904 Spilliaert travelled to Paris, bearing a letter of introduction from Deman to the Belgian poet Emile Verhaeren, who bought some of Spilliaert’s works and further encouraged him. After a few months he returned to Ostend, although he would travel to Paris each winter for several years. Only a handful of local collectors were aware of Spilliaert’s work, and it was not until 1908 and 1909 that he first exhibited his drawings in public. By the end of 1909 one art critic had described him in an Ostend newspaper as ‘still almost unknown, shrouded in proud modesty and disdainful of advertising, the young Oostende aquarellist Léon Spilliaert is a great, a very great artist.’ Spilliaert continued to take part in local exhibitions, and became a member of several artists groups, alongside such painters as James Ensor and Constant Permeke. By 1912 Spilliaert had become better known, and was invited to take part in a number of avant-garde exhibitions. In 1920, along with Ensor, Permeke and Gustave de Smet, he became a founder member of the Sélection group in Brussels, exhibiting regularly with them and contributing covers and illustrations to its magazine. Apart from a few years in Brussels, he spent most of his career in Ostend, and views of the port town and its surrounding coastline came to dominate his output.Léon Spilliaert remains best known today as a virtuoso draughtsman, and indeed drawings were his chief mode of expression throughout his career. Executed in pastel, gouache, Indian ink and wash or watercolour, his drawings are remarkable examples of original and inventive visual imagery that can perhaps best be described as Symbolist. The subject matter of his drawings included urban views – almost always depicted at night, and usually devoid of people - landscapes and seascapes, interiors, still-lives and, not least, a series of intensely introspective self portraits.