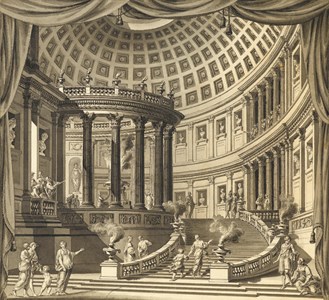 An architect as well as a designer of ephemeral decorations, Ennemond-Alexandre Petitot studied in Lyon with the architect Jacques-Germain Soufflot and later at the Académie Royale d’Architecture in Paris, where he won the Premier Grand Prix for architecture in 1745. He was at the Académie de France in Rome between 1746 and 1750, and in 1753 was appointed court architect to the Duke of Parma. He remained at the Ducal court in Parma, which was dominated by French influences, for the remainder of his career. Petitot published two important and influential series of prints; a compendium of Vases in 1764 and a series of satirical subjects entitled La Mascarade à la Grecque, which appeared in Parma in 1771. Several architectural drawings by Petitot are today in the collection of the Archivio dello Stato in Parma.