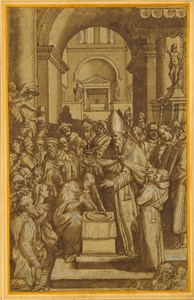 Relatively little firm biographical information exists for the Umbrian artist Felice Damiani, who was active between 1562 and 1608, although a large number of signed and dated paintings by him survive, from which a chronology of his career may be deduced. He was born in Gubbio and is thought to have trained there with the local painter Benedetto Nucci, although his study of Venetian painting is also evident in some of his early work. Later in his career, in the 1580’s, Roman influences come to the fore, in particular the paintings of the Zuccari, Cesare Nebbia and Girolamo Muziano. Damiani was active mainly in Umbria and the Marches, painting altarpieces for churches in Foligno, Gualdo Tadino, Gubbio, Loreto, Macerata, Recanati, Spello, Todi and elsewhere. In 1585 he painted a Last Supper for the refectory of the Palazzo Apostolico in Loreto, and the same year painted frescoes of the Life of the Virgin for Count Antonio Brancaleoni in the Castello Brancaleoni in Piobbico. Among his most celebrated works are a series of paintings and frescoes for two chapels in the Santuario dei Madonna dei Lumi in the Marchigian town of San Severino Marche, executed between 1594 and 1597. After 1600 he continued to produce numerous altarpieces for churches throughout the Marche and Umbria. Only seven drawings may be confidently attributed to Felice Damiani, whose draughtsmanship has tended to be subsumed under the vast corpus of 16th century Italian drawings generically described to artists in the ‘circle of the Zuccari.’ Nevertheless, to judge from the small group of finished compositional drawings by Damiani that have been identified, the artist may be characterized as one of the more interesting and talented draughtsmen active in central Italy at the end of the 16th century.