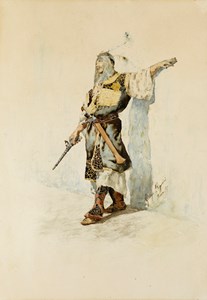 Giuseppe Signorini studied with the painter Aurelio Tiratelli in Rome and first exhibited his work at the Mostra del Circolo Artistico in that city. Early in his career he decided to devote himself to the medium of watercolour, and indeed relatively few oil paintings by him are known. Before he was twenty he was so highly regarded as a watercolourist that his finished drawings – of exotic Orientalist genre subjects, costume studies or lavish interiors, typified by a masterful technique - were avidly sought after by dealers and collectors in Italy, France, England and America. Although he seems never to have travelled to the Near East or the Maghreb, Signorini maintained a large collection of Oriental costumes in his studio, as well as furniture and tapestries, which he used to add a level of authentic detail to his compositions. He established a studio on the Via Margutta in Rome, and in 1881 organized an Arab festival, with participants, made up mostly of fellow artists, parading along the streets around the Piazza del Popolo, dressed in Oriental robes and turbans. Although he continued to maintain a studio in Rome, from 1899 onwards Signorini also spent much of his time in Paris, where he lived and worked for over thirty years. He won a number of prizes at the annual Paris Salons, and served as director of the Académie des Champs-Elysées. At the height of his career, Signorini’s Orientalist watercolours were being sold for high prices in Italy, France and America. A leading member of the Società degli Acquarellisti in Rome, Signorini also taught a number of the succeeding generation of Italian Orientalist painters. His work remained popular for many years after his death, and was the subject of a number of retrospective exhibitions in Milan and Turin in the years after the Second World War. Works by Signorini are today in the collections of museums in Barcelona, Bremen, Hamburg, Madrid, New York, Paris, St. Petersburg and elsewhere.