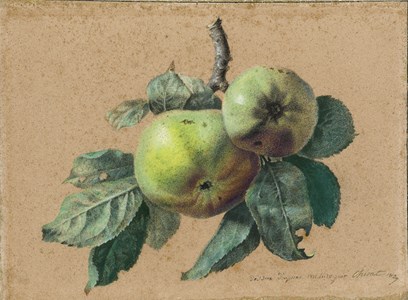 Little is known about the Lyonnais still life and botanical painter Benoit Chirat, who was a student of Antoine Berjon and Pierre Révoil at the Ecole des Beaux-Arts in Lyon, where he won a prize for flower design in 1813. Chirat worked mainly as a textile designer in Lyon, exhibiting at the Salon in Lyon in 1842 and 1843. In 1842 he settled in Paris, exhibiting at the Paris Salon that year and continuing to do so until 1866, showing mainly pastels and oil paintings of still life subjects of fruit and flowers, often incorporating bronze or stone vases, as well as portraits. A group of thirty-one lithographs of flowers and garlands, after original designs by Chirat, is in the collection of the National Museums and Galleries of Wales in Cardiff. His daughter Anaïs Duchesne (1820-c.1869) was also active as an artist in Lyon and Paris, and exhibited at the Salons between 1840 and 1849.