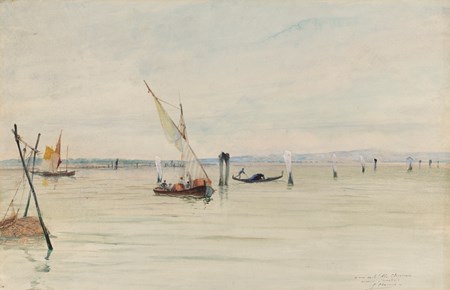 In 1861 Georges-Jules-Victor Clairin entered the Ecole des Beaux-Arts in Paris, where he studied under Isidore Pils and François-Edouard Picot. He first exhibited his work in 1866, and continued to do so throughout his career, winning a silver medal at the Exposition Universelle in 1889. In 1868 Clairin accompanied the painter Henri Regnault on a trip through Spain and Morocco, where he was particularly taken with Moorish architecture and costumes, and he also travelled in Italy in the company of Jean-Léon Gerôme. In Morocco he met the Spanish painter Mariano Fortuny, and together the two artists visited Tetuan. Apart from the easel pictures and illustrations for which he was highly regarded, Clairin received a number of public commissions, notably the ceiling painting for the foyer of the Opéra in Paris, painted in 1874, as well as the Bourse de Commerce, the Sorbonne and the Hôtel de Ville. This was the first of several decorations that Clairin would produce for hotels, chateaux and theatres over the course of his career. In 1895 he travelled to Egypt with the composer Camille Saint-Saëns, although he was taken ill and was unable to cross the Sinai desert as he had wished. Known to his friends by the nickname ‘Jojotte’, Clairin was a popular member of artistic society in Belle Epoque Paris, and was associated with an elegant crowd of socialites, writers, actors, artists and musicians. He was best known for his numerous paintings of the actress Sarah Bernhardt, who was a close friend and often hosted the artist at her country home. Bernhardt regarded the artist as her preferred painter, and he depicted her in a number of her stage roles as well as in more informal surroundings; two of the finest of his portraits of the actress are today in the Musée des Beaux-Arts in Tourcoing and the Musée du Petit Palais in Paris. Clairin exhibited at the Salon des Artistes Français, the Salon des Peintres Orientalistes Français and the Societé Coloniale des Artistes Français, as well as at the Salon des Artistes Algériens et Orientalistes in Algiers. He was made a Chevalier of the Légion d’Honneur in 1897, four years before a major exhibition of his work was held at the Galerie Georges Petit in Paris. A large number of paintings, watercolours and drawings by the artist were dispersed in two sales of the contents of his studio in Paris in 1920.