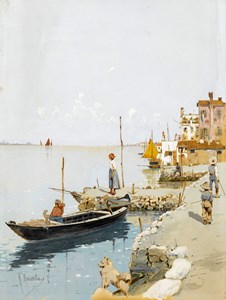 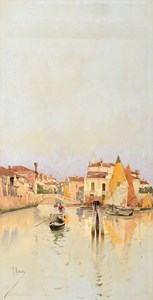 The son, grandson and great-grandson of painters, Raffaelle Mainella was trained at the Istituto di Belle Arti in Naples before transferring to the Accademia in Venice. Early in his career Mainella worked mainly as a painter in oils, with a particular preference was for views of Venice and its surroundings. But after a few years he decided to devote himself to watercolour, a medium in which he was highly regarded by his contemporaries. Although best known for his watercolour views of the Venetian lagoon, Mainella also produced a number of watercolours of Orientalist subjects. He travelled to Egypt in 1887 with the Swiss writer Baron von Gonzenbach, and his drawings were later used to illustrate Gonzenbach’s book Nihlfahrt. Mainella exhibited his work frequently in Venice, notably at the Biennale of 1897, as well in Berlin, Munich and Brussels. In 1901 he was invited by Count Robert de Montesquieu to mount an exhibition of his watercolours in Paris, and later was made an honorary member of the Société des Aquarellistes. Among the artist’s most important patrons was the American collector George Smith, who was in Venice between 1884 and 1886, and who assembled a collection of nearly fifty of his works, now in the collection of the George Walter Vincent Smith Art Museum in Springfield, Massachusetts.