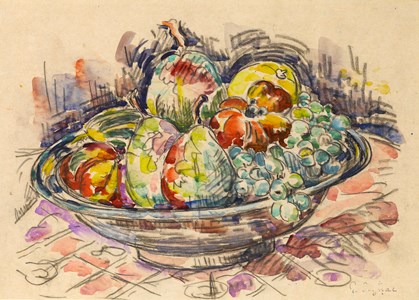 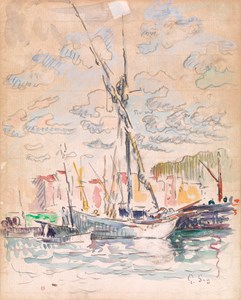 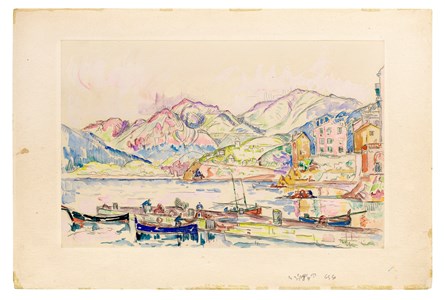 Active as a painter, draughtsman, writer and collector, Paul Signac was one of the leading artists of the Neo-Impressionist movement. He came from a wealthy bourgeois family, and as such was able to support the careers of several of his fellow artists as a patron and collector. He became a close friend of Georges Seurat, whose work he first encountered at the inaugural exhibition of the Société des Artistes Indépendants in 1884, and between them the two painters formed the nucleus of the group of artists known as the Neo-Impressionists. Signac would spend the winter working in his Parisian studio, while the summer months were spent painting at a coastal resort, eventually settling in Saint-Tropez from 1892 onwards. In 1904 Henri Matisse spent the summer with Signac at Saint-Tropez, a period that was to have a profound effect on the younger artist.Signac painted around six hundred canvases as well as a significant body of works on paper, mainly watercolours. As Marina Ferretti Bocquillon has noted, ‘Signac was the neo-impressionist who practiced watercolor most consistently…For him, watercolor was a seductive alternative to the demanding labor of studio painting, a zone of freedom that suited his restless temperament and love of the outdoors. It gradually took over from his work in oil...’