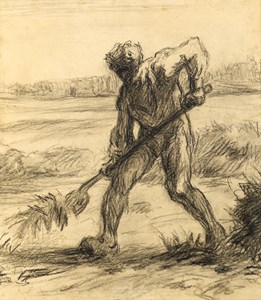 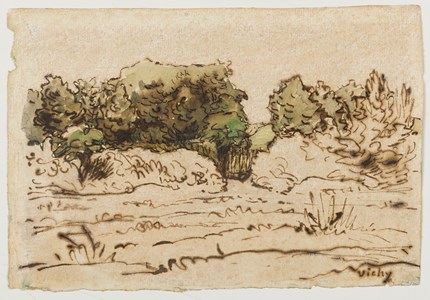 One of the founders of the Barbizon school of painting in France, Jean-François Millet studied at the Ecole des Beaux-Arts in Paris. It was in Paris in the 1840’s that Millet became associated with a group of landscape painters who were to become part of the Barbizon circle, including Théodore Rousseau, Constant Troyon, Narcisse Diaz de la Peña and Charles Jacque. Although Millet’s early career was dominated by portraits, by the 1850’s he began to paint pastoral subjects, many of which were acquired by his first patron and future biographer Alfred Sensier. Millet established his public reputation as a painter of peasant life with three seminal paintings; The Sower, exhibited in 1850, The Gleaners, painted in 1857, and The Angelus, completed in 1859. By the 1860’s Millet enjoyed a very successful career, receiving many commissions for paintings and, from the Parisian architect and collector Emile Gavet, for a series of highly finished pastel drawings. Honoured with an exhibition of his work at the Exposition Universelle in 1867, Millet was elected to the jury of the Salon in 1870, but by this time was already beginning to suffer from poor health. Four months after the artist’s death in January 1875, the contents of his studio were dispersed at auction.Millet was a skilled draughtsman, whose work ranged from quick sketches and more elaborate figure studies, to landscape studies in pen and watercolour, to highly finished pastel drawings that were sold as autonomous works of art, often for considerable sums of money. Robert Herbert has noted that ‘Millet’s penchant for drawing was catered to by the nature of his market. In the early years at Barbizon he sold few paintings at all, and at such derisory prices that the sale of three or four drawings could produce the same income…As the decade progressed – especially after the relative success of his Salon of 1853 – Millet acquired more opportunities for selling oils. Drawings still held priority, however, for they were his instinctive way of creating. Almost all his paintings were chosen from among drawings that had already been completed.’1 In the last decade of his career, landscape began to assume a more important role in his art, inspired in part by his travels beyond Barbizon. Although Millet lived in Barbizon from 1849 till the end of his career, he often spent summers elsewhere, such as his native Normandy and the Auvergne.