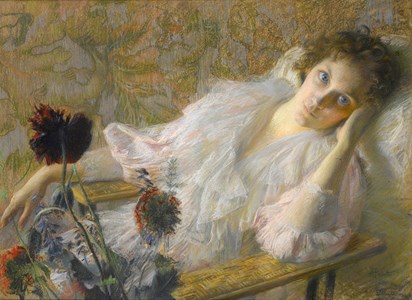 Born in Algeria to a French father and Spanish mother, Armand Point arrived in Paris in 1870 at the age of nine as an orphan. He won several prizes for drawing at school, and in 1879 returned to Algiers, where he began painting Orientalist subjects. One of his works was accepted at the Paris Salon of 1882, the first of a number of Orientalist paintings he sent to the Salons over the next few years. Returning to Paris, Point had his first one-man exhibition at the Galerie Georges Petit in 1889, showing paintings influenced by the art of the English Pre-Raphaelites and the symbolism of the Middle Ages. In 1891 Point settled in Marlotte, in the forest of Fontainebleau to the south of Paris, in a large house and studio where he was to work for almost forty years. In 1893 he exhibited a number of pastel drawings, including the present large sheet, at the Societé Nationale des Beaux-Arts, to considerable critical acclaim. He also participated in the Salons organized by Joséphin (‘Sâr’) Péladan’s Rose + Croix movement between 1892 and 1896, where he often exhibited drawings. Following a trip to Italy in 1894, and exposure to the works of Sandro Botticelli and other Renaissance masters, Point changed his style radically. After his Italian sojourn, Point’s paintings attempted to reconstruct the techniques and palettes of the Italian painters of the 15th century, taking the work of such artists as Botticelli and Leonardo da Vinci as exemplars. Inspired by the precepts of William Morris, in 1896 Point established a crafts studio in Marlotte. Entitled Haute-Claire, the atelier employed artists and craftsmen of many different nationalities, and produced jewelry, glass, pottery and other objects, many after Point's own designs, until it was closed in 1916.