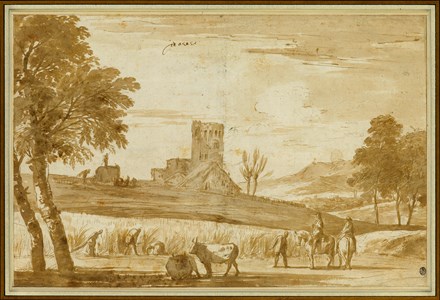 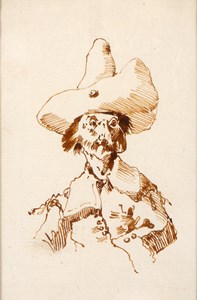 Marco Ricci received his artistic training in the studio of his uncle Sebastiano Ricci, with whom he often later collaborated. A landscape painter first and foremost, Marco Ricci completed the landscape backgrounds in Sebastiano’s canvases. He worked in Rome, Florence and Venice, and made the first of two trips to England in 1708, where he worked with Gianantonio Pellegrini on the decoration of Castle Howard and designed scenery for the Italian Opera at the King’s Theatre, Haymarket. He also visited England for a second time with Sebastiano in 1712, returning to settle in Venice in 1717. Together with his uncle and several other prominent artists, Ricci was commissioned by the entrepeneur Owen McSwinny to paint a series of allegorical tombs dedicated to prominent English noblemen; his Monument to the Duke of Devonshire was completed in 1725. Marco Ricci began to produce gouache landscapes, often on kidskin or leather, by the time of his second visit to England in 1712. As early as 1716, the English critic George Vertue praised the artist's ‘ruins in oil, and better in water-colours, and land-storms’, and the numerous examples of Ricci's gouache landscapes at Windsor Castle and in other English collections attests to their popularity among Vertue's contemporaries. Ricci seems to have taken up printmaking after around 1723, perhaps encouraged by the connoisseur and publisher Anton Maria Zanetti. Only thirty-three etchings by Ricci are known, twenty of which were included in the Varia Marci Ricci Pictoris Praestantissimi Experimenta, published by Carlo Orsolini in Venice in 1730, the year of the artist’s death.