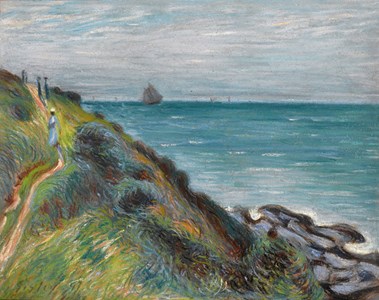 Born in Paris into an Anglo-French family, Alfred Sisley achieved relatively little commercial success and public recognition during his lifetime. Throughout his career his style remained true to the most basic Impressionist principles, without recourse to the technical or thematic development characteristic of the later work of such fellow artists as Claude Monet, Camille Pissarro and Pierre-Auguste Renoir. He also remained resolutely devoted to the practice of pure landscape painting, working en plein-air throughout his career. As Christopher Lloyd has noted, unlike Monet, Renoir and Pissarro in the 1880’s and 1890’s, Sisley ‘continued to explore the possibilities of the Impressionist style from within, retaining the same approach to nature and in this sense remaining a true Impressionist painter concerned with light, colour and atmosphere…it is this unswerving allegiance to Impressionism beyond the 1870’s that is the most distinctive feature of his work.’Sisley worked for much of his early career in towns and villages to the north and west of Paris, including Bougival, Louveciennes, Sèvres and Port-Marly, before eventually settling in the 1880’s at Moret-sur-Loing, well to the southeast of the city. Although not always appreciated by critics, Sisley was nevertheless much liked and admired by many of his fellow artists. As Pissarro wrote to his son Lucien in 1899, ‘Sisley…is a great and beautiful artist, in my opinion he is a master equal to the greatest. I have seen works of his of rare amplitude and beauty…’ At Sisley’s funeral, the collector and critic Adolphe Tavernier gave an oration in which he praised the artist as ‘a painter exquisite and original among them all, a magician of light, a poet of the heavens, of the waters, of the trees – in a word, one of the most remarkable landscapists of this day.’