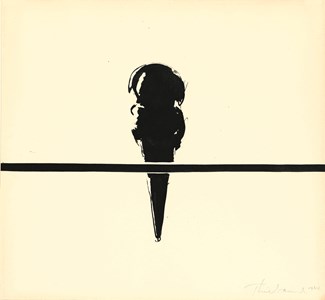 The American painter Wayne Thiebaud is perhaps best known for his colourful still life paintings and landscapes, painted with thick layers of heavy pigment. He began his career as an art teacher in Sacramento, and in the late 1950’s spent some months in New York, where he became friends with Willem de Kooning and Franz Kline, and was also influenced by the work of Robert Rauschenberg and Jasper Johns. Thiebaud had his first solo exhibitions in San Francisco and New York, but it was not until he met the New York dealer Allan Stone in 1961 that his work began to be brought to wider notice. Stone championed Thiebaud’s work, and mounted a series of exhibitions in his New York gallery over the next few years that firmly established his reputation.Thiebaud is, as he freely admits, a traditional artist. When he began to paint still life subjects in 1953, however, he chose not to depict the more traditional artistic motifs of flowers or fruit, but rather the humble, often mass-produced foods of everyday American life; pies, hot dogs, cakes, candy and ice cream. Thiebaud’s lifelong interest in such ostensibly banal subjects can be understood at its essence in a comment he made in an interview in 1968: ‘If you pick any food and isolate it, and if you look hard and long enough at it then it can become very revealing.’ Thiebaud’s still life paintings of food were his first mature works, and made his name following his breakthrough exhibition at the Allan Stone Gallery in New York in 1962. As has been noted of the artist, ‘In his still lifes of food, Thiebaud approaches a venerable artistic tradition with a fresh eye. Instead of recording an artfully constructed grouping of dissimilar objects, Thiebaud presents his pies and cakes and ice cream cones in a familiar orderly arrangement, as they might be displayed in a sweet shop counter. Moreover, in some of the paintings, he has reduced the still-life objects to just one or two or three items, isolated from any discernible setting.’Since Thiebaud first came to public attention in the early 1960’s with his bright and bold paintings of food, he has sometimes been labelled a Pop artist. Indeed, his work was included, alongside that of Andy Warhol, Roy Lichtenstein, Jim Dine, Ed Ruscha and others, in the exhibition New Painting of Common Objects at the Pasadena Art Museum in 1962, considered one of the first exhibitions of Pop Art in America. Yet his earliest still life paintings predated some of the Pop artists, and Thiebaud’s work remains somewhat apart from the usual Pop idioms. As one scholar has noted, ‘Thiebaud’s paintings are quiet, like those of some of the artists he admires: Vermeer, Chardin, Morandi, Eakins and Hopper. They are, in fact, essentially the reverse of the clamor of advertizing [sic] pitches proclaimed in Warhol’s soup cans or the melodramatic comic strips that form much of Lichtenstein’s early imagery.’Thiebaud often treated the same subject in a range of different media; in oil, pencil, charcoal, ink and pastel, as well as in the form of prints. As one scholar has written, ‘Thiebaud has always been curious about how an image is transformed in different media as well – how images change when rendered in color versus black and white or with a textured rather than flat surface...Thiebaud is married to the traditional idea of working compositions out slowly and coming to know his subjects with some depth and care.’