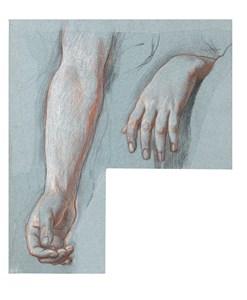 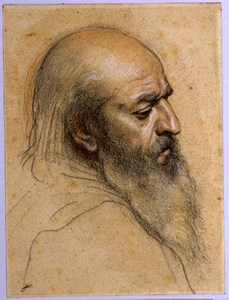 The son and nephew of artists, Alexandre Hesse entered the Ecole des Beaux-Arts in 1821. In 1830 he made his first visit to Italy, and his experiences in Venice inspired his painting of The Funeral of Titian, exhibited at his Salon debut in 1833, where it won a first-class medal. He returned to Italy in the same year, again visiting Venice, where he made several copies after the work of Titian, Tintoretto and Veronese; artists who were to be a particular influence on his own work. In 1836 he received a State commission for a painting of The Body of Henry V Brought Back to the Louvre after his Assassination, intended for the Galerie d’Apollon of the Louvre and today at Versailles, as are two further paintings from French history, commissioned for the Salle des Croisades. Hesse lived and worked in Rome between 1842 and 1847, and on his return devoted much of his later career to providing paintings for chapels in Parisian churches, including Saint-Séverin, Saint-Sulpice and Saint-Gervais. He also worked at provincial churches and decorated the ceiling of the Palais de la Bourse in Lyon between 1868 and 1870. Hesse continued to exhibit at the Salons until 1861, and in 1867 was nominated to succeed Ingres at to the Institut de France. His last significant commission, for the decoration of a chapel in the Parisian church of Saint-Germain-des-Pres, was left unfinished at his death.