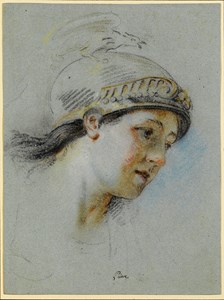 Jean-Baptiste Marie Pierre enjoyed a highly successful career as a painter of easel pictures, church altarpieces and large-scale decorative schemes, mostly executed between the 1740’s and the 1760’s. He won the Grand Prix de Rome in 1734 with a painting of Samson and Delilah, now lost, and studied at the Académie de France in Rome between 1735 and 1740. Pierre made his debut at the Salon the following year, and was reçu at the Académie Royale in 1742, followed two years later by his appointment as a professor there. In 1752 he was named premier peintre to the Duc d’Orléans, for whom he produced ceiling paintings for the Palais Royal in Paris. Pierre painted numerous works for Parisian churches, including altarpieces for Saint-Germain-des-Prés, Saint-Louis du Louvre, Saint-Sulpice and Saint-Roch, where he also painted the cupola of the church, as well as the cathedral of Saint-Louis in Versailles. He also provided mural and ceiling decorations for the chateaux of Fontainebleau, Versailles and Saint-Cloud. In 1770, Pierre was named premier peintre du roi, succeeding François Boucher, and director of the Académie Royale. The 1770’s and 1780’s found the artist mainly engaged on administrative tasks, with a corresponding decline in his painted output.