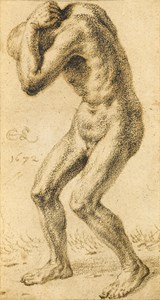 The elder brother of the landscape painter Herman Saftleven, who remains much better known today, Cornelis Saftleven spent most of his career in Rotterdam. He is thought to have received his training there, alongside his brother, in the studio of their father, a history painter. A versatile and imaginative artist, with a predilection for unusual and inventive subjects, Cornelis Saftleven painted landscapes, peasant genre scenes (often of a satirical nature), barn interiors and still life subjects, religious and allegorical scenes, as well as the occasional portrait and a number of phantasmagorical subjects and diableries. (That he was particularly regarded for his paintings of fantastic subjects is seen in the caption accompanying the reproduction of his portrait by Anthony Van Dyck, included in the series of famous prints of artist’s portraits known as the Iconography, in which he is described as ‘Hollandus Pictor Notium Phantasmatum’.) Saftleven became dean of the painter’s guild in Rotterdam in 1667. Around two hundred paintings by the artist are known or recorded, many dated between 1629 and 1678.