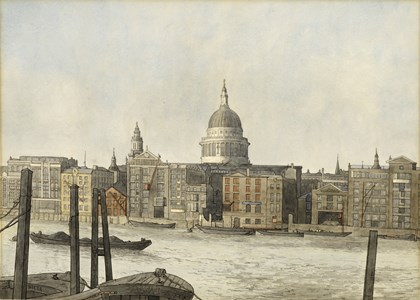 Born in Hampstead, Algernon Newton studied at Clare College in Cambridge and at the London School of Art in Kensington. After art school he lived away from London for several years, in Dorset, Cornwall and elsewhere. Much of his work from 1923 onwards was made up of urban views of London, often depicted without figures and thereby creating a sense of profound stillness and calm. He avoided the more famous parts of the city, however, preferring instead the run-down areas of Bayswater, Paddington and the industrial landscapes along the Regent’s Canal in Camden Town and Kentish Town. (Indeed, the artist was christened ‘The Regent’s Canaletto’ by some journalists.) As Newton recalled in his memoirs, ‘When I first came to London from Cornwall, I could not see anything I wanted to paint but after a few weeks of wandering around the streets in all parts of London, I came to the conclusion that there was much worth painting and that London held a very individual beauty of its own, a beauty that was London. There always seemed to be a warm haze enveloping everything including the sky and the clouds floating behind the roofs and chimney pots looked even more majestic than they had appeared in Cornwall. I was chiefly attracted to the poorer districts and the slums. They seemed to me so much more beautiful than the West End of London, there was more of the individual character of London there, far more mental atmosphere and a certain sadness made up of human associations hung over the sordid streets and backwaters of London.’ The late 1920’s found Newton’s work favourably received by critics and collectors. His large paintings were selling for between £250 and £350 apiece, and he counted several wealthy and noble families among his patrons. In the 1930’s he began to paint ‘portraits’ of country houses, commissioned from their owners. Throughout his career, Newton showed his work mainly at the Royal Academy annual exhibitions from 1924 onwards (although he had a painting accepted there as early as 1903) and he became an Academician in 1943. He also showed his work occasionally in a handful of London galleries. After around 1954 urban London subjects disappear from his oeuvre, and the last decade and a half of his career were devoted to landscape painting.