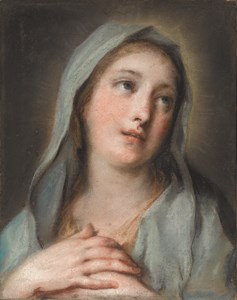 The Venetian artist Rosalba Carriera is often credited with the invention of the pastel portrait. Characterized by a superb mastery of technique, her work in pastel raised the practice to new heights, while her brief stay in Paris between 1720 and 1721 was influential in establishing the fashion for the medium that blossomed in France in the 18th century. As the The 18th century French connoisseur Pierre-Jean Mariette wrote of Carriera’s pastels, ‘It must be agreed that this Demoiselle has discovered the art of treating this type of Painting in a way that no one had before her, which makes the most skilful say that this sort of pastel, with all the strength and truth of colours, preserves a certain freshness and lightness of touch where transparent, which is superior to that of oil painting.’Carriera's early work consisted mainly of miniature portraits on ivory - serving either to decorate the lids of snuff boxes or as independent works of art in their own right – which brought her to the attention of a number of important foreign visitors to Italy. Admitted as a ‘pittrice e miniatrice veneziana’ into the Accademia di San Luca in Rome in 1705, she presented as her reception piece a miniature of A Girl with a Dove. Carriera’s early miniatures tended towards mythological or allegorical depictions of women or scenes of women at leisure, and, at least in the early part of her career, she produced relatively few portraits of men. Around the same time, however, Carriera began to complement her work as a miniature painter with the pastel portraits on which much of her current reputation rests; indeed, she may be said to have pioneered the use of the pastel medium for portraiture. A pastel self-portrait of c.1708 was much admired and was acquired by the Grand Duke Cosimo III de’ Medici for his collection of artist’s self-portraits, it is today in the Uffizi. From the second decade of the 18th century onwards Carriera’s pastel portraits took on a more subtle tonality, with delicate colours and a greater interest in the characterization of her sitters. Her commissioned pastel portraits of this period, while often of such grand personalities as King Augustus II of Poland, retain a degree of intimacy and informality that adds significantly to their charm. Carriera worked for a large circle of clients in Venice and throughout Italy, further afield, for patrons in France, England, Germany, Austria and Scandinavia. In 1720 she was invited to Paris by the collector and connoisseur Pierre Crozat. She spent just over a year in France, achieving much success and enjoying considerable acclaim. Admitted into the Académie Royale in 1721, she counted among her patrons prominent figures at court - she produced several portraits of Louis XV as a boy, both in pastel and in miniature - and members of the French aristocracy. She was friendly with many of the leading artists of the day, and in particular was strongly influenced by Antoine Watteau. Following her stay in Paris pastel drawings came to dominate her output, and later in her career she produced fewer miniatures. On her return to Italy her reputation as one of the leading pastellists in Europe was firmly established. Among her many patrons was Consul Joseph Smith, many of whose purchases were later acquired for the Royal Collection by George III. Another significant patron was Friedrich-Augustus II, Elector of Saxony, who commissioned from Carriera a painted series of the Four Elements, and who formed one of the largest collections of her work. Indeed, a room in his palace in Dresden hung with over 150 pastel drawings by the artist, assembled for the Elector by the collector Francesco Algarotti, was regarded as one of the finest sights in the city.